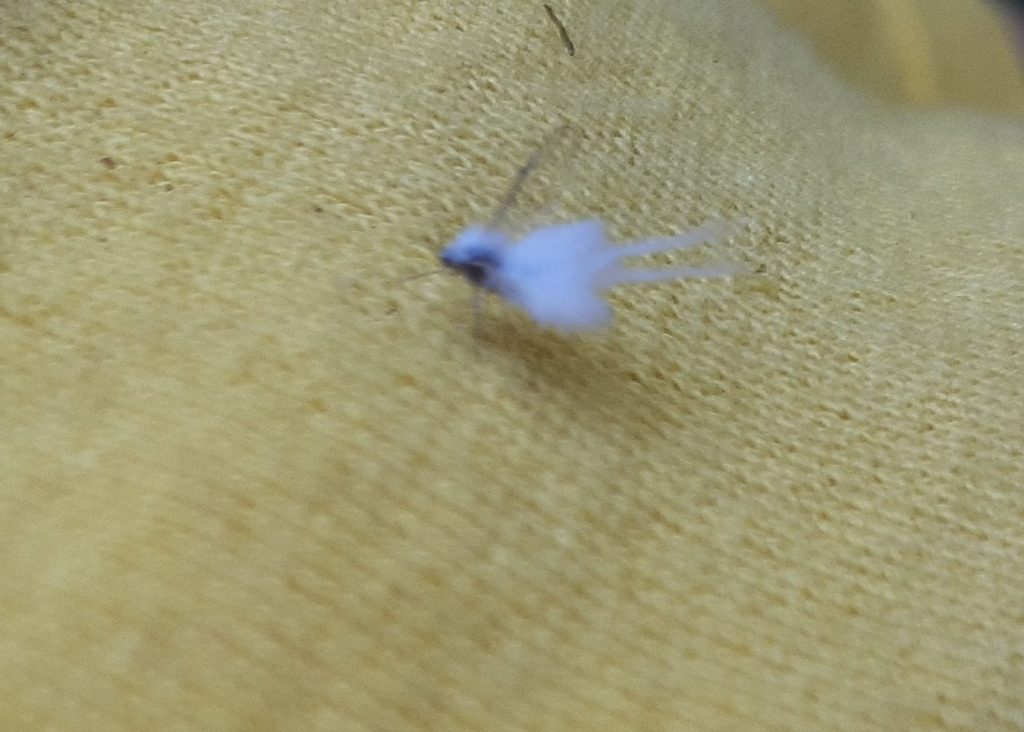 Do fairies exist? We’ll leave that up to you and your children. So what are these small fuzzy white flying things that occasionally resemble floating pollen or cotton? Are they harmful to gardens and the lawn? They are Fairy Bugs or fairy flies also called Wooly Aphids. More importantly in some situations, they may be a great help with lawn care maintenance.

Eriosomantinae is the Greek name for this aphid subspecies. It translates to wooly body.

There are many species in the world of the wooly aphid but only one is common in the U.S.This one host in Hawthorn and Apple trees. They have a waxy white filament that helps them camouflage from predators. While the fuzzy white fluff allows them to catch wind currents and drift to new locations.

Wooly aphids are unique and fun to watch, often gaining the rapt attention of children. But they have a slightly darker side when it comes to planting health. These white fluff balls drink plant sap also called honeydew leaving a tiny hole behind in the tree. Then they float around landing where the wind takes them spreading things like sooty mold in the process.

While they can spread bad things between plants they do have a redeeming quality. They are very anti-social and do not hang around together. The female lays her eggs among those of other insects and when the new clutch hatches they eat the eggs around them. Often flies, leaf-hoppers, and weevil eggs.

Not much is known about these little guys on average their small size and anti-social behavior make them hard to study apparently. But different variations can be found all over the world.

This year we have noticed several and had a chance to take pictures. I don’t think I have seen this many in Northwest Arkansas in at least 20 years. The last time was the late 90’s I noticed them while sitting outside with an older lady who has lived in the area her whole life she originally thought they were pollen falling from the tree we were sitting under. After catching one she had no idea what it was and did not recall seeing them before.

Wooly Aphid Fairy Bugs have some good and bad traits all in a pretty little package that keeps kids guessing and maybe outdoors just a little longer.