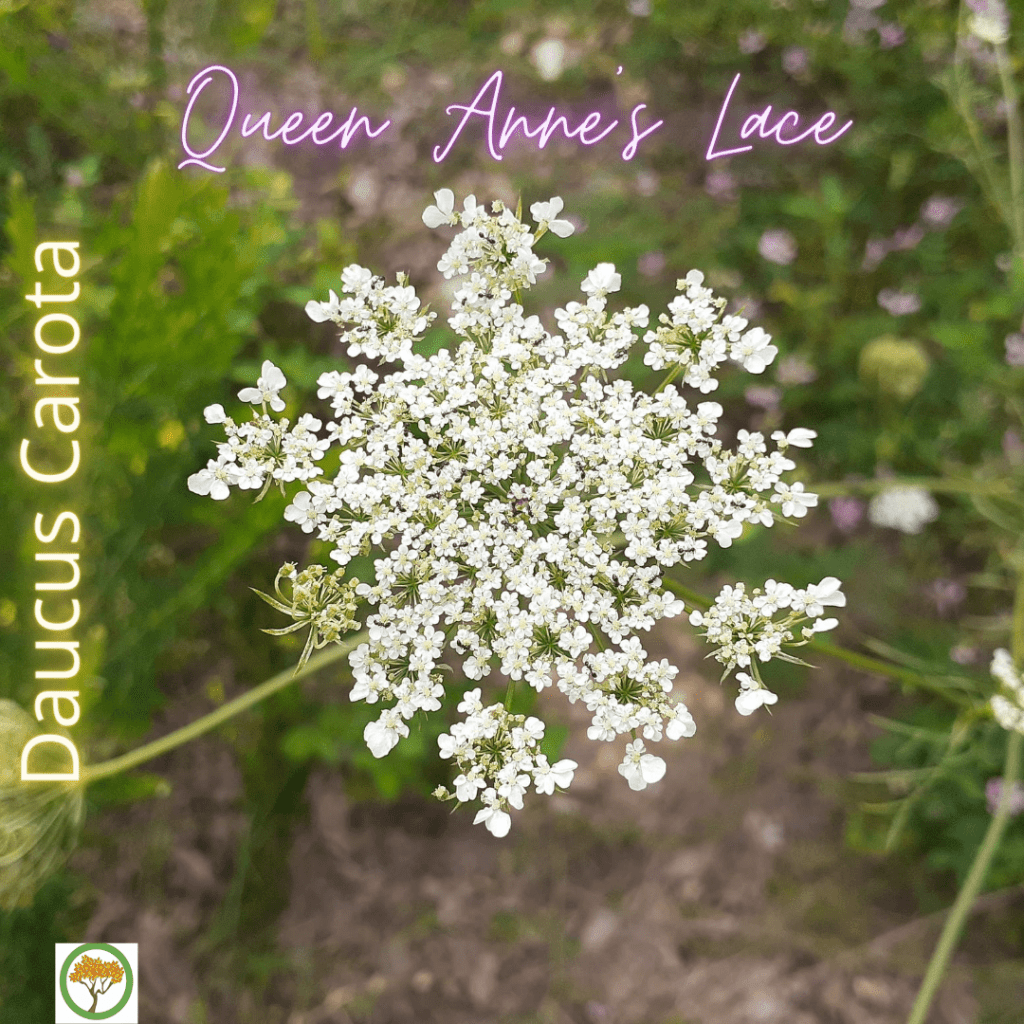 Daucus carota or Queen Anne’s Lace is a native plant from Europe and southwest Asia that has been naturalized to North America and Australia. Here in Northwest Arkansas and the Ozarks, we can find it freely growing in fields and along roadsides from May to October.

This plant has many common names wild carrot, bird’s nest, and Bishop’s Lace just to name a few. The most common Queen Anne’s Lace comes from a story involving Queen Anne of  England pricking her finger and a drop of her blood falling onto the piece of lace she was sewing.

Queen Anne’s Lace grows up to 4 feet tall. It has long fern-type leaves that can be as long as 8 inches. The stem is topped with a large white flat head created from many tiny blooms that may each have a purple center giving the head an appearance that resembles lace. Once the fruit begins to form the flowers fold inward giving the flower the appearance of a bird’s nest.

This plant closely resembles several poisonous plants. If you ever decide to try harvesting Daucus carota for any reason edible or display please have expert help. Simply coming in contact with some of the plants that resemble it may cause serious physical harm. Some commonly mistaken imitators are:

The ancestor to the Carrot

This biennial ancestor to the domestic carrot lives for 2 years. The first year of its life it spends getting bigger and grows a long-edible taproot. The root is pale and thin with a woody appearance about as big around as a finger. The root may be used in tea or soups and stews along with the seeds. The leaves are also edible in the first year and can be used in salad. In the second year, the plant has a taste that is too woody tasting for consumption.

The Romans once ate the root as a vegetable. The Irish, Hindus, and Jews used it as a sweetener. It has the second-highest sugar content for a root vegetable, the first being beets.

It was used as a medicine before it was considered a food. Ancient people used the seeds medicinally and the leaves as an herb. Today Queen Ann’s Lace is known to be an antihistamine, anti-inflammatory, anti-psychotic, and anti-oxidant. Researchers are working on using it to help with Alzheimer’s, Crohn’s, Parkinson’s, cancer, and diabetes.

Queen Anne’s Lace provides great habitat and food source for many insects and animals. As well as being great to use in companion gardening for boosting tomato production and keeping lettuce cooler. All of that being said the USDA has declared it a noxious weed that competes too much with true native plants.

For now, we will continue to see Queen Anne’s Lace in Northwest Arkansas. It will continue to provide a food source for insects and a habitat for birds. Even as farmers battle to keep it out of their fields.