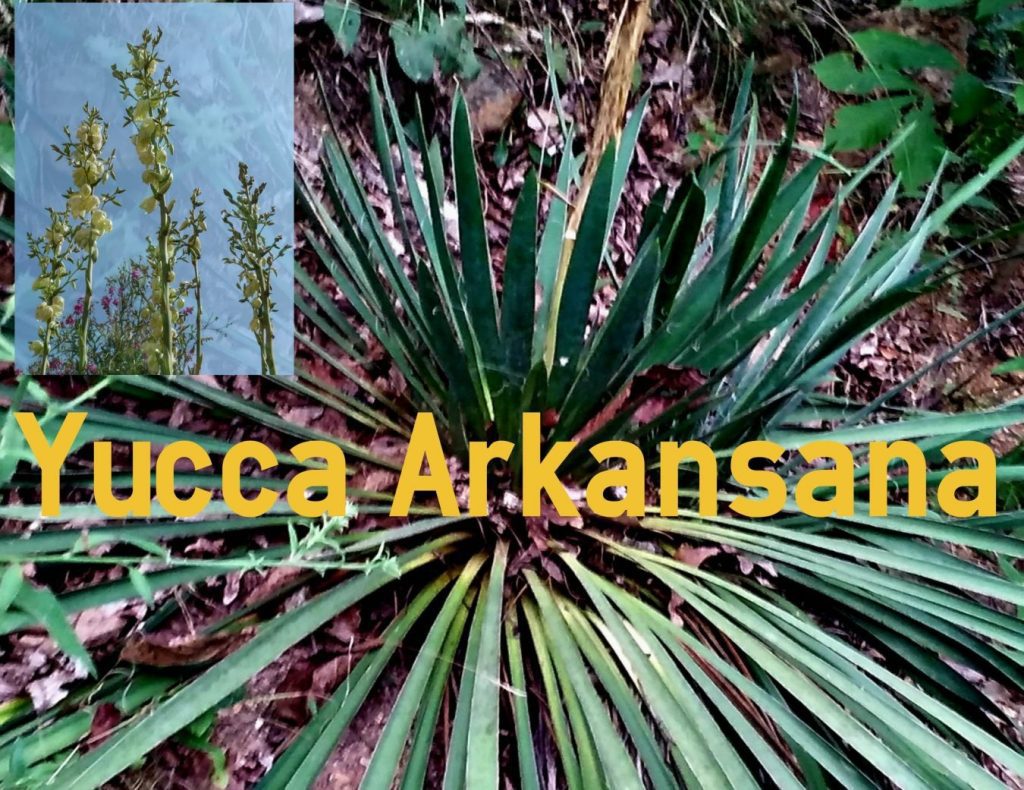 The Yucca arkansana is the smallest of the yucca family aparacarceae.  It only grows in Arkansas, Missouri, Oklahoma, Kansas, and Texas. Out of the 40 species in its family, the Arkansana is truly tiny especially compared to the monstrous Joshua Trees of California that can grow 40 feet tall. The arkansana on the other hand only grows stalks up to about 30 inches tall.

The tall stalks that boast the gorgeous white flowers grow out of a base of blue-green leaves with sharp tips (be careful this is part of the reason I don’t like them, the tips are very dangerous).  The flowers have 3 whitish green petals and  3 sepals on each flower. Sepals are found under the bloom, they protect the bud as it grows and later provide support for the flower once it blooms (on a rose the sepal would be the green section between the stem and petals). The yucca stalk can have many blooms all the up it, the flowers are gorgeous when they bloom between April and June.

Where The Yucca Arkansana Likes to Grow

Like most yucca, this one likes to grow in rocky well drained soil. It can be found on rocky hillsides or dry prairies. It likes full or partial sun but may grow in the shade too. Soil content is not really a big factor for the yucca.

The Yucca Arkansan’s indifference to where it grows makes it great to landscape with.  Its roots are great at stabilizing rocky slopes where erosion is an issue. Being a perennial and evergreen are also big marks in its favor. The Arkansana will thrive in the coldest weather its native environment can throw at it, as long as it is in well-drained soil so that the roots stay dry. It will stay in place forever to provide a stabilizing force where it is needed. This plant is nearly impossible to kill. 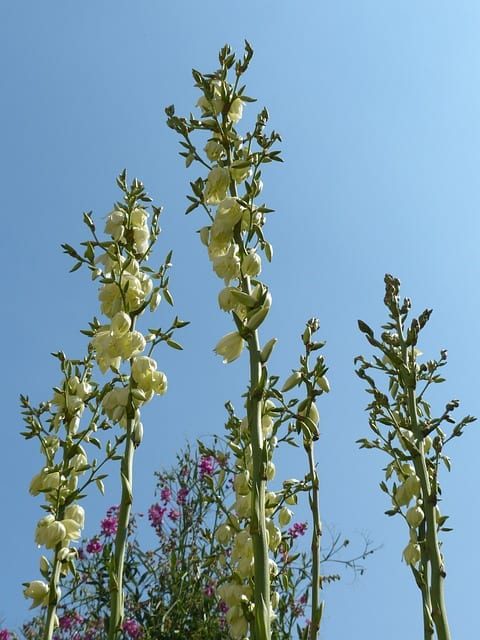 Fallen seeds will germinate themselves when temperatures reach between 60 and 70 degrees. It will also reproduce with rhizomes, stem cuttings, or by transplanting offsets from the side of an existing mature plant. I am telling you the yucca just keeps coming back it is a very hardy and self-sufficient plant.

The Yucca Moth is one of the most amazing things about the yucca family. For millions of years, these two species have had a symbiotic relationship. These two species cannot survive without each other. The moth population varies from region to region depending on the yucca population. Without the yucca seeds for the moth larvae to feed on their species would become extinct. In turn, the moth is the only insect that can pollinate the yucca.

In the central U.S., the yucca moth is species that pollinates the yucca arkansana is the  Tegeticulla yuccasella it only comes out at night. When the female is ready to lay a clutch she collects pollen from the yucca flowers with two short tentacles near her mouth. She rolled the pollen into a ball and sticks it to her head. She takes her ball of pollen to a yucca flower and opens a hole in the flower’s ovary and lays her clutch there. She then packs her pollen ball into the flower’s stamen and makes the flower with her sent to alert other moths that the flower has been used.  This allows the moths to control how many eggs have been laid in each plant so that the plant does not abort the eggs. When the eggs hatch they eat the seeds inside the yucca plant fruit until they burrow their way out. The scent of the pheromone the mother laid to alert other moths of her clutch keeps the plant from aborting the eggs and helps control the population of both species. Too many moths would eat too many yucca seeds and too many yucca seeds would create too many plants. Nature is an amazing thing.

American Indians made use of almost every part of their native yucca. The flowers of most yucca are edible raw, boiled, and even pickled. The stem of some is also edible and the roots can be used to make soap. I was unable to find anything specific on the uses of the Arkasana as far as recipes and such but most sources seem to think that it is no different from most of its cousins along this line.

The Amazing Yucca Of The Ozarks

The smallest yucca in America thrives naturally right here in the Ozarks. Through floods, drought, snow, and in rocky clay soil. A perennial and evergreen with an amazing symbiotic moth relationship right here in the Ozarks and Northwest Arkansas. Don’t forget to watch closely at nighttime for the yucca moths if you add this plant to your landscape.